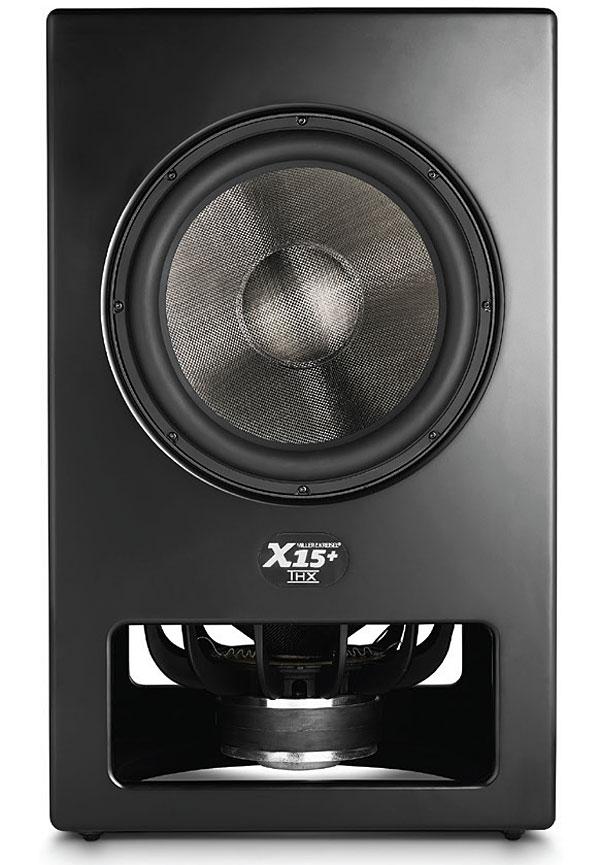 No control app or handset

The performance of M&K Sound’s THX Dominus Certified X15+ is over the top. Highly recommended if you demand bass that can go extremely deep and loud even in the largest of rooms.

Let me state from the outset that I’m a fan of M&K sound speakers. I have owned an M&K S-150 surround system for the past 18-plus years and have zero desire to change it out anytime soon. The first I auditioned it in a Magnolia Hi-Fi store back in 2002 made me an instant admirer of the brand, and it took me two years of saving up to be able to afford a full 7.1 speaker package. I fully bought into M&K’s – and THX’s principle that using a subwoofer/satellite configuration to separate and optimize the reproduction of low frequencies improves midrange purity and accuracy. Also, that filtering deep bass from the main speakers lets you achieve louder playback with less distortion while simultaneously expanding less amplifier power. Another benefit to sub/sat systems: you can arrange your main speakers to optimize their performance, while the subwoofer (or multiple subs) can be separately positioned to maximize bass output.

Several years ago, I reviewed M&K Sound’s X12 subwoofer and was impressed enough to award it a Top Pick designation. I really wanted to keep that sub permanently in my system, but had two kids attending college at the time and new A/V gear wasn’t in the family budget. When I heard the company’s latest generation flagship sub, the X15+, was headed my way for review, I started to wonder: Would the upgrade bug strike again?

While the X12 used dual 12-inch wooders, M&K Sound has upped the ante with the X15+, which features dual 15-inch woofers and is the company’s first sub to achieve THZ Dominus Certification, a new designation meant to provide THX reference levels in a 6,500 cubic foot room. Unsurprisingly given its capabilities, the X15+ comes at a steep $5,999 price. If this is too much subwoofer (and budget) for your room, there are two smaller models available, the X12+ ($4,999) and X10+ ($4,999), both of which are THX Ultra Certified (achieves reference level in rooms up to 3,000 cubic feet).

The X15+ is the result of a ground-up re-design from M&K Sound’s engineers and employs a new custom driver, class-D amplifier, and sealed enclosure, all of which work together to deliver controlled and extended bass. One thing the company hasn’t changed is Ken Kreisel’s original push-pull driver configuration, a concept that made its debut in 1988 with the MX-1000 subwoofer. While it has been refined over the years, the basic idea remains the same: a front-firing woofer coupled with a bottom-mounted driver. To briefly summarize, this design allows for a smaller cabinet volume while providing more powerful bass with less distortion. Additionally, it eliminates harmonic distortion and doubles sound power per watt of amplifier power to achieve 6dB extra output. 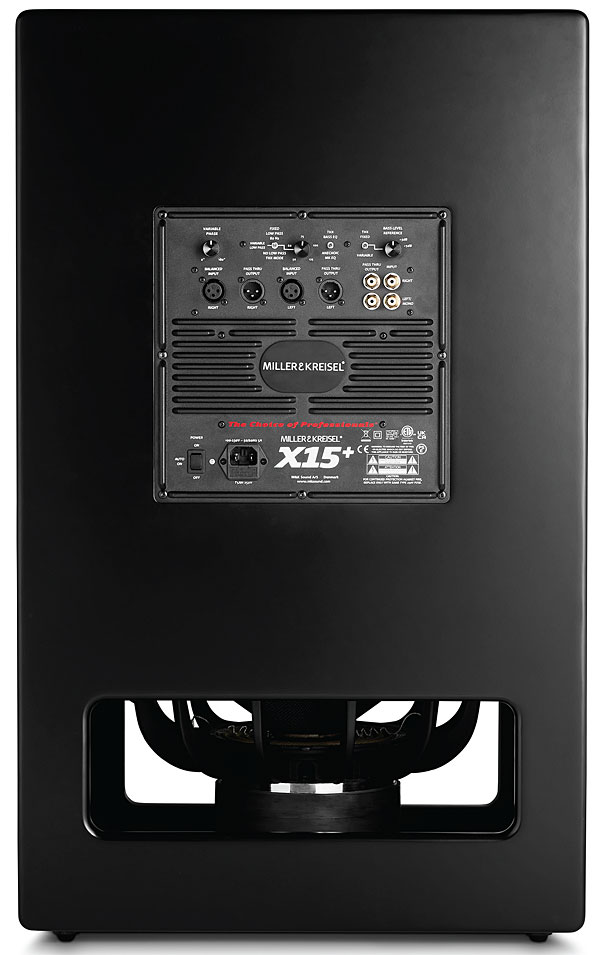 The new drivers in the X15+ feature larger and longer voice coils plus new cones, dust caps, surrounds, spiders, and cast aluminum woofer frames. The wooder cones and dust caps have been upgraded to a carbon-fiber design coupled with a foam inner layer that, according to M&K Sound, ensures consistent performance to keep up with the new subwoofer design’s additional power and increased excursion.

With 1-inch MDF construction and bracing, M&K sound’s satin black cabinet is built like a tank. While my wife would disagree, I think this is one of the nicest-looking subwoofers I’ve auditioned, and the design of the main driver is so appealing that I was happy to leave the magnetically attached speaker grille off. 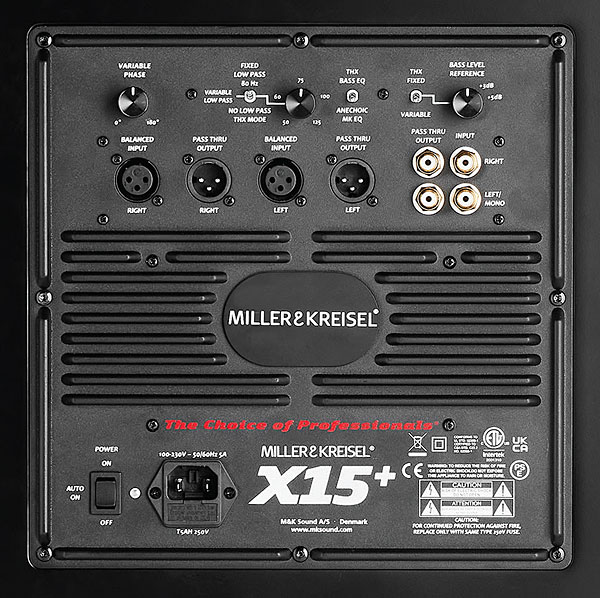 The amplifier is an ICEpower class-D digital switching version rated for 700 watts RMS and 1,400 watts peak. While there are subwoofers out there with more power, the efficiency of the sub’s push-pull design makes any spec comparisons moot.

The X15+ omits a key feature found on several recent high-end subs: onboard room correction. M&K sound’s philosophy is two-fold in this regard. First, they believe their subwoofers will interact well with any listening space as long as they are placed and adjusted properly using the basic onboard controls. Second, nearly every A/V receiver and preamp/processor these days already has built-in room correction processing, and the company believes that room correction needs to be applied across the entire frequency range and not just at the subwoofer level to be fully effective.

A second key feature the subwoofer lacks in a Bluetooth control app- all adjustments are manual and must be made using the controls on the sub’s rear panel. (A standard remote control also isn’t provided). Granted, for most listeners setup happens once and the subwoofer is not touched again for years, but I’ve gotten used to making adjustments from the couch versus doing things the old-fashioned way of reaching around back.

The X15+ features standard controls such as a variable phase knob (0-180 degrees), three low pass filter settings (Fixed 80Hz, Variable, and No Low Pass THX Mode), bass level reference (THX Fixed and Variable) and a switch to choose between THX Base EQ (for movies) or Anechoic MK EQ (for smaller rooms and music). I found I got the best results using No Low Pass THX Mode (the crossover was set electronically in my pre/pro), THX Bass EQ, and THX Fixed bass level reference (level adjustments made with pre/pro). The sub’s connections include both balanced XLR and RCA inputs and outputs. There’s also a non-grounded detachable power cords as well as a three-way power switch (Off, Auto, and On).

No user manual shipped with the X15+, though I was able to download one from the M&K Sound website. Given all of the various onboard controls, it’s worth reading through before you begin the setup process. (And no, you won’t have to surrender your man card if you take time out to read the manual.)

Uncrating this 135-pound beast was a two-person job. The sub arrives double-boxed, and once you get it on the floor it’s somewhat easy to maneuver around the room as long as you have a friend on-hand to assist. Given the large enclosure (20.3 x 32.8 x 18.1, WxHxD), placement can be tough depending on your room. In my case, I tried putting it in a convenient location along a side wall. This positioning ended up being a huge mistake and lead to a nasty dip in bass response at 25 Hz. I then repositioned the sub one-third of the way across my front wall and hot much better, though not perfect, results (see measurements).

I ran than the X15+ in my system for well over a week to acquaint myself with its distinct sound signature before doing any heavy testing. If you’ve never listened to a system with an M&K Sound sub first-hand, it’s something you need to experience. There are a ton of great subwoofers on the market, but M&K models do have a unique and extremely precise sound.

After that first week of break-in, it was time to see how deep and loud this baby would go. Initial impressions were very favorable. First off, the sub- 20Hz performance of the X15+ was extremely impressive. I did an A/B comparison with the full suite of reference subs that I use in my system- SVS PC-Ultra, HSU 15H-MK2, and dual JL Audio F110s- and the X15+ on its own was able to produce higher measurable output below 17Hz (it’s rated down to 16Hz, so it more than meets its specifications). As you can see by the measurements, the X15+ holds its own against my reference EQ’d sub array. (If I was able to test a pair of X15+ subs, I’d be able to overcome my 40Hz room node because utilizing multiple subwoofers evens out frequency response throughout the room.) 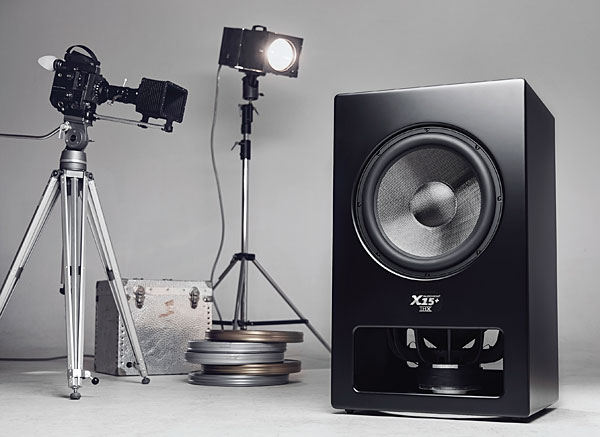 Edge of Tomorrow is a movie that begs for an Ultra HD Blu-ray release along with a newly minted Dolby Atmos soundtrack, but alas, we have to slum it with the old Blu-ray for now. Regardless, this movie is one of my favourite guilty pleasures both for its entertainment value and grin-inducing favourite guilty pleasures both for its entertainment value and grin-inducing DTS-HD Master Audio 7.1 soundtrack. As the film opens, there’s a low-frequency sweep that really separates the subwoofer men from the boys. In fact, my reference subs can’t play this sequence at anything louder than – 10dB without massive distortion. I started at -15dB with the X15+ and it handled that with no problems. Next, I tried – 10dB (pass), then – 5dB (pass), and finally 0dB from reference. To my surprise, it never bottomed out or lost any clarity or precision. Perfection!

Next up was my usual battery of movie torture tests: Interstellar (black hole sequence), 13 Hours: The Secret Soldiers of Benghazi (compound attach), The Greatest Showman (intro song), and Hacksaw Ridge (“soften them up” scene). The M&K sub’s ability to dig deep and play loud proved mighty impressive – at one point I was afraid it was going to wake the dead in a nearby cemetery.

So, the X15+ shines with movie soundtracks, but can a 15-inch sub work equally well with music? YES! I cued up the Imagine Dragons Smoke & Mirrors Live Blu-ray with its reference-quality Dolby Atmos soundtrack. I initially planned to just listen to the intro and then jump ahead to “Radioactive”, both of which feature outstanding bass, but I ended up so enthralled that I sat through the entire 102-minute concert, marveling at the M&K Sound sub’s accuracy and precision. Over subsequent days I found myself going through various concert discs to recapture my initial experience: Eagles Farwell 1 Tour – Live from Melbourne, Hans Zimmer: Live in Prague, and Pink’s Funhouse Tour: Live in Australia, among others. In each case, I grew more and more impressed with the 15X+.

To say I enjoyed my time with M&K Sound’s C15+ would be an understatement. In fact, I’ve enjoyed it so much it’s not leaving my home. This push-pull sub design plays deep and loud, and it passed the most strenuous tests I could throw at it with ease. Add in the impeccable build quality and peace of mind that THX Dominus Certification brings to the table, and acquiring it became an easy decision despite the lack of conviences such as app control or a handy remote. In the end, everything comes down to performance and the quality of the bass, and by this measure it’s the best subwoofer I’ve encountered in two decades of audio product reviewing.