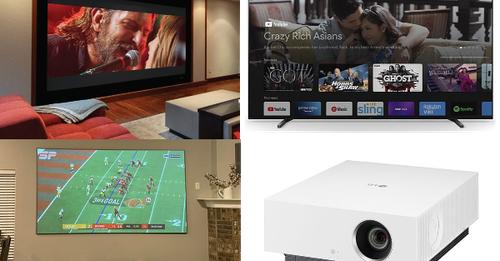 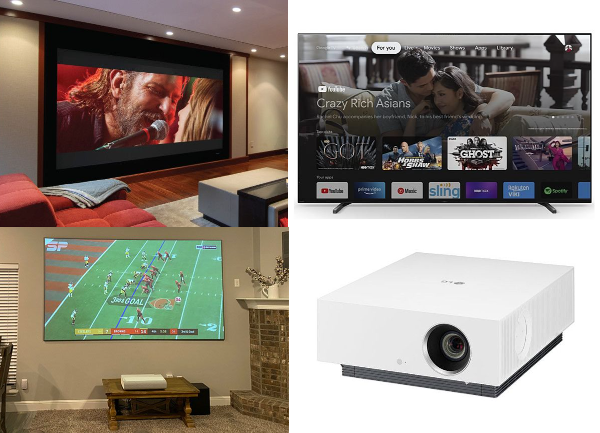 Supply disruptions and the ever-lingering effects of the COVID-new-Delta pandemic have made it a challenging year for getting new A/V products to market. Despite the slowdowns, we’ve managed to corral enough gear to keep our reviewers busy even though we would have preferred having more options in some product categories. Our test reports have focused on TV and video projection in recent weeks so we decided to broaden the scope of this roundup to include all TV-and video-related products that have been awarded Top Pick status so far in 2021. 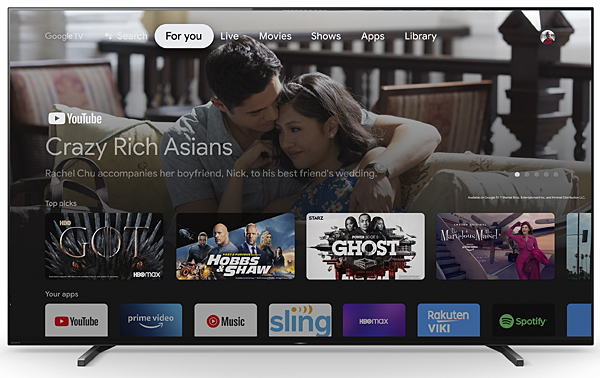 Sony continues to expand its presence in OLED TV, this time with a full-featured model built to deliver top-featured model built to deliver top-shelf video performance at a price most of us can afford. The XR-A80J supports Dolby Vision high dynamic range (HDR), Google and Amazon voice control, and is equipped with HDMI 2.1 inputs and a surprisingly decent sound system, but what’s most intriguing is Sony’s new Cognitive Processor XE, which analyzes hundreds of thousands of picture elements in real time and makes tweaks to improve image quality. The goal is to get as close as possible to what you would see on a professional video monitor. To accomplish this, the processor detects the most important focal points in each frame and enhances them in a way that complements how our brains work. Hyperbole aside, it actually seems to work.

As veteran TV reviewer Tom Norton put it, “I can’t say exactly how much Sony’s Cognitive Processor XR adds to the A80J’s stunning image quality, but I’d wager that its contribution is significant. Watching the documentary Samsara, the scenes in Versailles, and the making of a mandala in a Hindu monastery looked even more strikingly vivid than usual. Costume dramas profited as well, with Victoria & Abdul offering a rich tapestry of Victorian décor, particularly in the banquet hall scene with its brilliant red highlights.”

Through the Sony’s black-level performance wasn’t the best he’s seen, Norton characterized shadow detail as “superb” and praised picture quality during bright scenes. “Toy Story 4 began conventionally enough, but once I got to the scenes at the carnival and in the antique shop, the results were dazzling. A brief shot of illuminated chandeliers in the shop was so startlingly vivid that I involuntarily gasped.” High praise, indeed.

With its 65R635 LCD TV, TCL embraces the popular Roku platform that puts top streaming services at your fingertips while demonstrating the benefits of using Mini-LEDs to deliver more uniform backlighting at a budget-friendly price- hence, our Top Value designation. The TV boasts an impressive 160 zones of local dimming for its 65-inch screen, which translates into a highly satisfying viewing experience whether you’re watching in 4K or standard high-definition.

The set also brings quantum-dot technology into the fold for expanded colour performance, supports three flavors of high dynamic range HDR)- Dolby Vision, HDR10 and HLG- and is equipped with a low-lag THX Certified Game Mode to meet the challenges of fast-paced gaming. It even offers a unique feature call iPQ Mobile Calibration that uses the camera in an iPhone or Google Pixel phone to capture onscreen images and perform a rudimentary colour calibration.

Putting the set to the test with “Guardians of the Galaxy Vol.2 and other challenging material on 4K Blu-ray, video perfectionist Tom Norton described what he saw as “eye-catching” with the ability to convey subtle detail and rich colour. He was also impressed with how cleanly the set handled the “wickedly challenging” horses-grazing-in-snow demo segment from the Spears & Munsil UHD HDR Benchmark test disc and praised the TCL set for its ability to produce impressive looking Dolby Vision HDR images. 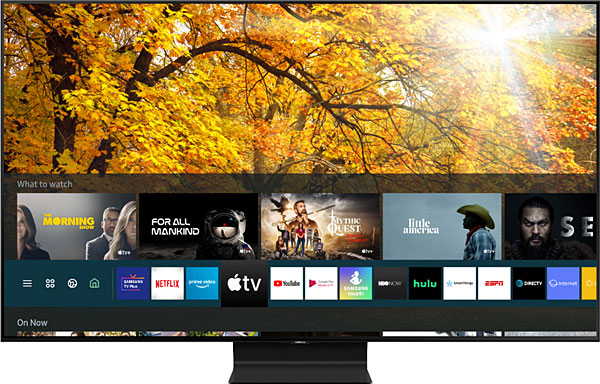 Samsung significantly lowered the price of its flagship 4K LCD TVs when it introduced the 65-inch QN65Q90T in late 2020. With a list price $1,500 less than 2019’s outstanding QN65Q90R, the Q90T is aggressively priced, though it is actually derived from the  Q80R series, which means it’s missing a few refinements found on the Q90R. The external One-Connect box housing the TV’s inputs, outputs, and power connections is gone and the number of local dimming zones has been reduced from 400 to 98, which takes black-level performance down a notch. Of course, the Q90T is also 800 bucks less than the Q80R.

Otherwise, the TV is loaded with features- including an excellent Movie mode with grayscale controls- and supports a 60-Hz frame rate, P3/4:2:2 10-bit colour, and three of the four high dynamic range formats (Dolby Vision is the odd man out). More to the point, the Q90T delivers impressive out-of-0box performance with strong off-axis viewing and, in the words of reviewer Tom Norton, produces “brilliant HDR images” and “excellent shadow detail” with vivid colour and crisp detail on 4K material. If you’re shopping for a high-performance TV in the $2,000 price range, be sure to check out Samsung’s QN65Q90T. Even though it’s a 2020 model, the TV is still available through amazon.com, walmart.com and samsung.com. 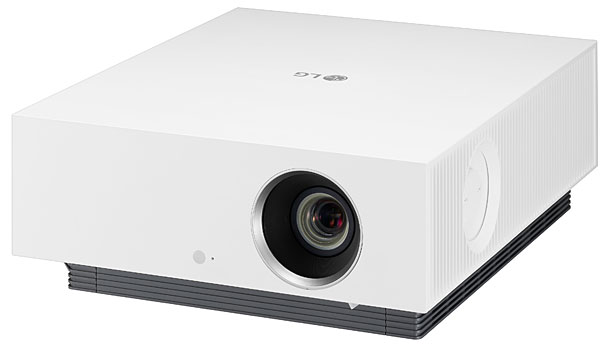 LG’s HU810PW breaks ground as the first ceiling-mount projector to offer the sort of smart features we’ve come to expect from today’s TV’s. The laser-lit DLP projector uses pixel shifting technology to deliver 4K resolution and provides ready access to Amazon Prime Video, Disney+, Peacock, YouTube, Showtime, Starz, and other streaming apps via a wired or Wi-Fi connection, courtesy of the same webOS 5.0 interface found in LG’s flat-panel TVs. The projector also comes with LG’s Magic Remote, which lets you control the projector using voice commands or by pointing at (and clicking on) a cursor on the screen.

Smart TV tricks aside, the projector is equipped with an eARC-enabled HDMI 2.1 port for routing audio (including Dolby Atmos) from the projector to an outboard receiver or processor and is spec’d to cover 97 percent of the DCI-P3 colour space in addition to supporting the HDR10 and Hybrid Log Gama high-dynamic-range (HDR) formats. it also features a Dynamic Tone Mapping mode that adjusts HDR images on  frame-by-frame basis and offers a series of white-balance adjustments you don’t usually find on a projector.

No question, this is probably the most feature-laden ceiling mount projector in existence but it’s also a strong performer. Reviewer Al Griffin was particularly impressed with the detail and contrast conveyed in the opening scenes of the sci-fi classic 2001: A Space Odyssey on Ultra HD Blu-ray, the rich colour in the Amazon Prime series ZeroZeroZero, and the projector’s HDR prowess in the mostly monochrome 2018 Chinese film Shadow. There was a “wide range of creamy gray tones in scenes that take place in the king of Pei’s court, nd I didn’t note any colour tinting that wasn’t originally part of the movie’s post-production special effects. Blacks looked consistently solid, and image highlights also had a satisfying level of punch.” In the final analysis, LG’s HU810PW delivers impressive all-around performance and a bevy of unique features at a reasonable price. 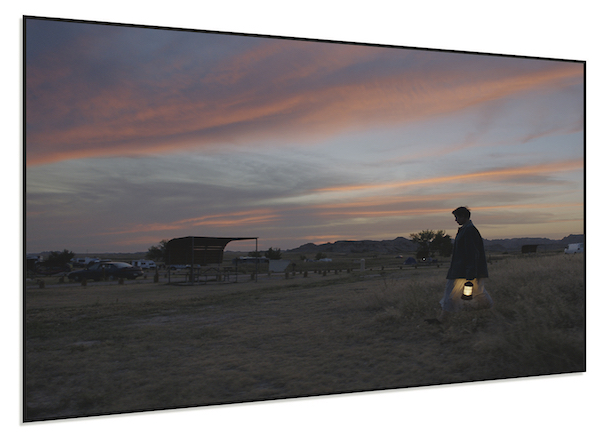 It’s taken a few years but ultra-short-throw (UST) projectors that throw a massive image when placed only inches from the wall have become well established with the likes of Samsung, LG, and Epson now offering UST models. Sure, you could project the image on a base wall but why would you? the result will be far from ideal for all sorts of reasons, which brings us to EPV’s DarkStar UST 2 Efinity- a video projection screen designed specifically for us with this  new class of projectors.

The Efinity is an affordable ambient-light-rejecting (ALR) screen designed expressly for use with a UST projector. In short, a special optical coating on the surface of the screen filters out most of the light emanating from above the screen while reflecting light coming from below where the projector sits; the screen also has a special black layer that absorbs light to increase contrast and colour saturation. Using Epson’s Top Pick-designated LS500 projector, resident video expert/S&V editor Al Griffin put a 9-foot-wide (123-inch diagonal) screen with a thin fixed-edge frame only 0.4 inches thick to the test. He was not disappointed.

With years of experience judging video quality, Griffin was impressed with both the “floating TV” look he was able to achieve and the screen’s ability to render rich, detailed images with movies and sports- even when the room’s overhead lights were left on. “The IMAX-shot scenes in Tenet on Ultra HD Blu-ray were incredibly immersive as they filled up the full 16:9 aspect ratio screen. This is how you do IMAX at home! As I watched a sequence where The Protagonist fights travelers from the future in the time0turnstile,m details like the pinstripes of his suit were clearly rendered amidst all the motion and chaos, and black levels were for the most part solid.” If you like the idea of achieving a vivid, theater-like presentation without having to turn off all of the lights in the room, EPV’s DarkStar UST 2 Efinity screen can help get you there. 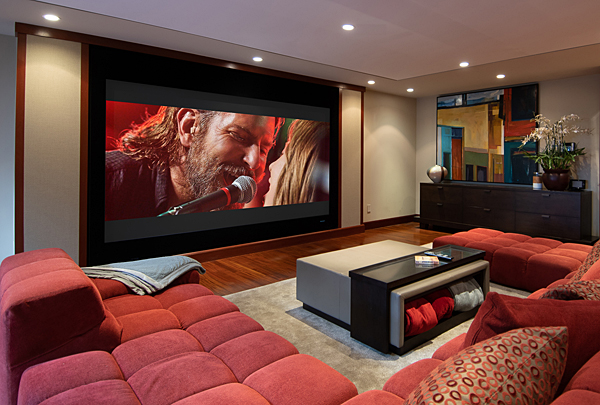 Stewart Filmscreen has been crafting movie-theater screens at its facility in California since the Golden Age of Hollywood so it knows a thing or two about making high-performance video screens. The company is, of course, also well versed in the art of making “acoustically transparent” (AT) screens designed to pass sound from the speakers located behind the screen in every commercial movie theater- and a growing number of home theaters. The company’s new Harmony G2 screen is made of a proprietary woven fabric specifically designed to enhance audio fidelity’s without compromising image quality, particularly brightness, colour accuracy, and white-field uniformity.

Professional video calibrator Michael Hamilton evaluated an 8 x 4.5-foot screen using Epson’s outstanding 5050UB projector, Sound & Vision’s 2019 Top Pick of the Year in projectors. It didn’t take long for his inner video geek to verify the screen’s ability to deliver “fantastic detail, wonderful edge-to-edge uniformity with no motion artifacts” and confirm that its woven structure does not impede or colour the sound moving through it. Five hours of watching Formula 1 racing and the varied dialects of international pit crews nd drivers revealed “no discernable diminishment of intelligibility.” If there’s a caveat, it’s that the Harmony G2 demands a bright projector, especially with high dynamic range (HDR) content. Even so, it distinguishes itself as a reference-grade screen worthy of our highest recommendation.