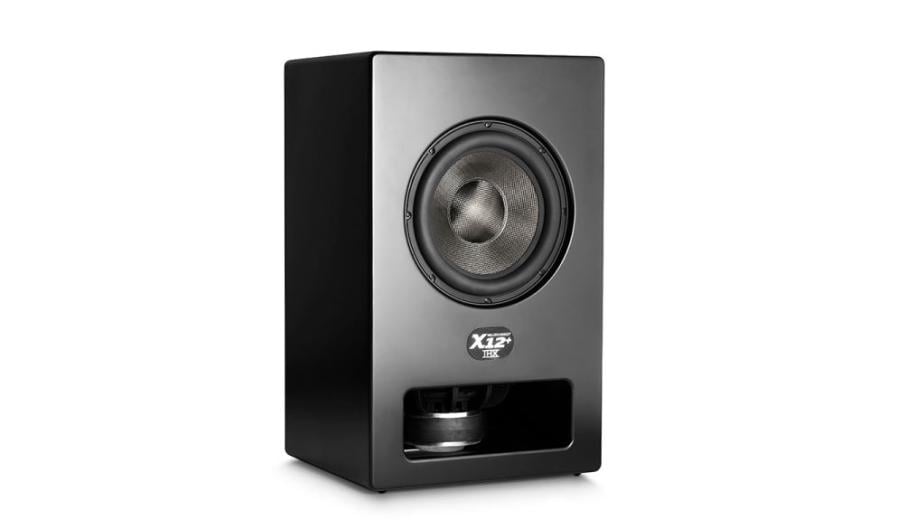 The M&K Sound X12+ makes another fine addition to the company’s long history of excellent subwoofers. The redesigned drivers and beefier amplifier than that on the previous X12 add up to a subwoofer that can fill most rooms with plenty of high-quality bass. At nearly £4,000 though, that quality comes at a high price.

In the 1960s Ken Kreisel designed a low frequency woofer to supplement the frequency response of electrostatic speakers sold by his then business partner, Jonas Miller. Not long after, in 1973, Steely Dan invited Kreisel to bring his novel woofer to the studio, to help with their third studio album, Pretzel Logic. Kreisel’s subwoofer became the first ever to be used in a studio. From that, the subwoofer-satellite concept was born (originally dubbed by Kreisel as ‘David and Goliath’), and Miller and Kreisel became part of home cinema history. The original company owned by Miller and Kreisel is, of course, no more, but its legacy has been living on and thriving through the Danish-owned M&K Sound.

The purpose of this potted history is not just to pique the reader’s interest, but to put this review in context: M&K Sound lays claim to inventing the subwoofer. So, when the company releases a new flagship range of subwoofers, expectations are high. Does the X12+ live up to this esteemed history? Perhaps more prosaically, at £3,995, does the X12+ justify its premium pricing?

The M&K Sound X12+ is a dual ‘push-pull’ 12” subwoofer and part of M&K’s new line of X+ Series subwoofers. It sits in the middle of the range between the dual 10” X10+ and the dual 15” X15+. The X+ subs are said to improve significantly on their X Series forebears, with redesigned drivers, some modest aesthetic changes and increased amplifier power. In the case of the X12+ this means 600W RMS, 1200W peak, which is a significant step up from the X12 that was 400W and 700W respectively.

The design of the X12+ is very much an evolution of the existing X12, rather than a radical departure. It shares broadly the same aesthetic albeit with the welcome addition of a magnetic grille and more rounded edges. Whilst these changes do make the X12+ a more attractive beast, it is still, fundamentally, a black cuboid that most owners (and/or their significant others) will wish to hide.

As with all M&K subs, the X12+ is a sealed design. It is rather tall for a sealed subwoofer, at 72.8cm. However, it is also unusually shallow, at 38.5cm. I cannot think of a single subwoofer with comparable driver surface area as shallow as the X12+. Clearly M&K have decided that added height is a worthwhile compromise in return for reduced depth, while retaining the same box volume. That’s a shrewd move from MK, which sells heavily into the custom installation market. The shallower depth means the sub can be integrated more easily into shallow screen walls or, if freestanding in room, will take up less floor space. M&K Sound also point out that, if these subs are used in recording studios, the reduced depth will allow for more leg room under mixing consoles.

Perhaps the most visually apparent change to the design comes in the form of shiny new silver drivers. The drivers were redesigned to handle the increased power capabilities of the X+ Series amplifiers and are constructed from carbon fibre, sandwiching a foam inner layer. M&K states that the new cones are stronger, stiffer and lighter than those on the previous X Series.

Of course, one of the X12+’s more noteworthy design features is not the driver you see, but the fact that driver is coupled with another identical, bottom-mounted driver, that faces into the cabinet. These push-pull compound loading designs have long been a staple of MK Sound’s higher end subwoofer range. The drivers are wired electrically out of phase, which means that when one driver is moving away from its magnet the other is moving towards its magnet, in the exact opposite position. Thus, one driver fires forward into the room, while the other fires into the room with the rear of its cone.

This push-pull configuration provides a variety of performance benefits. Most obviously, it increases the driver surface area in contact with the air in the room. The surface area of two 12” drivers is almost exactly equivalent to the surface area of one 17” driver. By spreading amplifier power across two drivers, power handling is increased, and overall distortion is lowered. Distortion is reduced further by the cancellation properties inherent to the push-pull design, as the distortion products of each opposing driver cancel each other out. The net result of all this should be a more linear response without the need for other techniques, such as servo control. M&K contends that the design also doubles the efficiency of the system, meaning twice the sound power per watt of amplification from the X12+’s ICEpower Class D amplifier (something that should be borne in mind when comparing the X12+ to its competition).

I positioned the X12+ in the rear right corner of my room, a position I know to yield a reasonably even frequency response (predicted by Room EQ Wizard Room Sim and verified in real world use). I hooked it up using the XLR output from my Trinnov Altitude 16 into the XLR input on the back of the X12+, then set the X12+’s low pass to ‘No Low Pass THX Mode’, as I would be relying on the Trinnov for bass management. 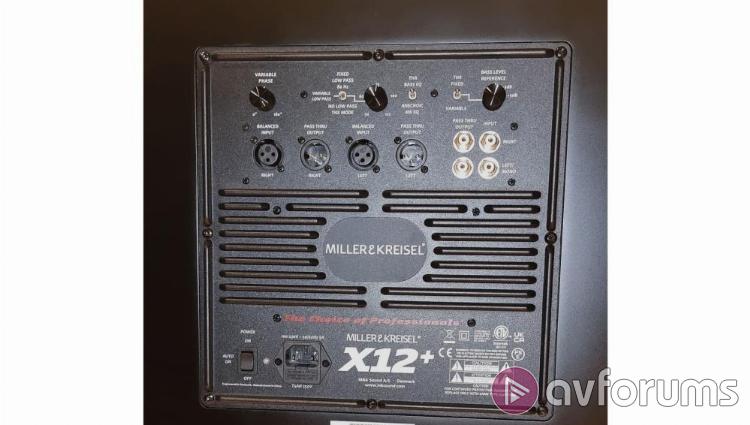 The X12+ gives users the choice between ‘THX Bass EQ’ mode and ‘Anechoic MK EQ’, the difference being that the former rolls off at -6dB at 20Hz and the latter -12dB at 20Hz (both measured free field). Naturally, I selected ‘THX Bass EQ’ mode, which I expect the vast majority of users would opt for. The Anechoic MK EQ mode is said to be intended for those with small rooms, where less low frequency extension might be desirable. It seems a relatively pointless option, as I very much doubt many people would spend £3,995 on a subwoofer to then neuter its low frequency extension.

…it can’t counter the laws of physics

The controls on the back of the X12+ are basic. Many subwoofers at this price point feature some form of room correction, be that automatic room correction or manual PEQ. Increasingly, manufacturers link this to an app which allows users to adjust options on the fly. No such functionality is available on the X12+. M&K sees room correction on a sub as redundant, because most owners will already use full-range correction in their processors or AVRs. Whilst this is a perfectly reasonable argument, and one I happen to agree with, some users might regard this as a somewhat stingy omission. Nevertheless, I do rely on full-range correction in my processor and, once I ran the Trinnov Optimizer and dialled in my target curve, I was ready to put the X12+ through its paces.

I watched Prey for the first time a couple of days before the X12+ arrived. As a huge fan of the first Predator film, and to a lesser extent the second, I approached Prey with caution, induced by successively appalling films in the franchise. I need not have been concerned though; Prey’s possibly the best Predator movie since the original, and, what’s more, it has a fantastic Atmos track. I was keen to hear how it would sound with the X12+, and boy did it sound good!

The scene at 00:05.10, where the Predator’s ship flies over Naru, the title rolls and the drumbeat builds in intensity, had me grinning ear-to-ear with the X12+. It had no problem pressurising my room as the ship broke through the clouds, whilst underpinning the drumbeat with wonderfully taught bass. This was precisely the type of punchy, chest-thumping bass I tend to associate with M&K subs. So far, so good. However, whilst this scene was a great test of the X12+’s performance between 50-80Hz, it didn’t do much to test its low frequency extension. For that I needed something with a little more low frequency meat on its bones.

Onto Overlord, and an opening scene that will rattle your neighbour’s crockery. Fans of the film will be familiar with the D-Day flight scene, and know that Bokeem Woodbine’s pep talk to a group of wide-eyed paratroopers presages a subwoofer workout like no other. Again, the X12+ performed admirably. The thunderous cacophony of bombs exploding outside the aircraft alongside the throbbing bass track can become a droning mess in the wrong hands or with a poorly calibrated system. With the optimised X12+, it was glorious. Each explosion arrived with terrific impact and clarity, separated distinctly from the next. Now admittedly, much of this clarity is down to good room setup and is a function of my listening room’s low reverberation time. But even knowing this, the X12+ surprised me with an articulacy to its sound I’ve seldom heard elsewhere.

… I didn’t get remotely close to the X12+’s limits

The last film I tried the X12+ with was Deepwater Horizon. During the scenes in chapter 9 and 10, where the drill pipes burst and the tower explodes, the X12+ generated truly prodigious amounts of bass. Certainly, the X12+ had no trouble shaking my sofa and related each explosion with almost unnerving concussive force. There’s a phrase in the M&K white paper that accompanies the X12+ which I quite liked that describes this effect: “startle factor”. Deepwater Horizon illustrated precisely what that phrase means. When the X12+ is called upon to produce explosive impact, its delivery is positively brutal.

Should I buy one?

The MK Sound’s X12+ provided more or less everything I would want from a subwoofer. True, it lacks the EQ and app baubles available on other subs at this price point, but I question the utility of those features for most users, who rely on their AVRs or processors for room correction. Additionally, at 600W RMS, it may seem underpowered by comparison to the competition at this price, but this needs to be viewed in the context of M&K’s efficiency claims. In any event, in my 5.5m by 4m listening room, I didn’t get remotely close to the X12+’s limits. What the X12+ did provide though, and consistently, was a thoroughly composed, articulate and downright powerful performance across its frequency range.

The one sticking point I do have with the X12+ is its price. £3,995 is an awful lot of money for a single subwoofer, where the same money will buy two or more highly specified subwoofers from multiple other manufacturers. As good as the X12+ is, it can’t counter the laws of physics and compete with the more even frequency response afforded by multiple subwoofers. This ultimately might be its Achilles’ heel. But value is always in the eye of the beholder, and for those who can afford it and want a well-engineered, incredible sounding sub, the X12+ will not disappoint.