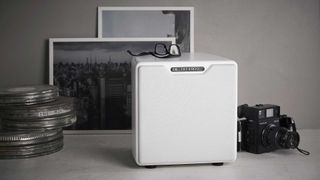 M&K Sound has released a new version of its compact V10 subwoofer, with the dimensions of the new V10+ radically squashed from a former vertical-standing design to a new neat, tapering design that’s 34.5 cm square at the front and narrower at the back.

At the same time its available Class-D power has been raised from 200W to 300W, with its lowest bass output extended to 24Hz at -3dB and a potentially visceral 20Hz at -6dB. And that’s despite retaining the advantages of a sealed cabinet design, which includes easier placement together with, in general terms, a tighter and more articulate bass with punchier and lower distortion performance and then designed.

The tapered cabinet here is both compact and attractive in black or white satin finishes, with a matching magnetically attached grille over the forward-facing 10-inch driver which, incidentally, employs a new stiffer treated-paper cone.

The rear panel can be rearranged but retains all the inputs and controls of the previous V10, with dual line-level inputs and looped outputs, fully variable volume, crossover and phase dials, and the option to invoke auto triggering.

Why M&K claims “the choice of professionals”

If you need a background to M&K Sound, consider this. The Lord Of The Rings trilogy was mixed on M&K Speakers. Star Wars Episodes I, II, and III- mixed on M&K speakers, King Kong, The Incredibles, Pearl Harbor, Black Hawk Down- all mixed on M&K speakers. And another thing those movies all have in common? They’re all Academy Award winners for their sound. Hence M&K’s catchphrase of “the choice of professionals”.

M&K Sound, aka Miller & Kreisel, was an American firm for three decades after its founding in 1974, and has claims on creating the very first subwoofer-satellite system, the ‘David and Goliath’ released back in 1976, and the first self-powered subwoofer in 1977, the Servo Volkswoofer.

Equally legendary was the birth of the company following Ken Kreisel’s commission from Steely Dan’s Walter Becker to design a tri-amped studio monitoring system, including balanced-drive 12-inch subwoofers, used for the mixdown of the Pretzel Logic album in 1973/4.

For the last decade M&K Sound has been based in Denmark, delivering a string of successes and award winners; we still rate a Sydney demonstration of a full M&K Sound S300 system in the early days of Dolby Atmos by Lars Johansen (ex-Peerless with work on JBL, Harman Kardon, Klipsch, Jamo, and other brands) as one of the top 10 surround experiences we’ve ever heard for power and purity. We note also that M&K Sound has put out a brief trailer for an upcoming X+ 15-inch push-pull subwoofer that will be THX Dominus-certified. Dominus was announced in 2020 as the newest and ‘largest’ performance class of THX Certification.

Dominus certification requires specifications that enable speakers to reach cinematic THX Reference Levels in rooms of up to 184 cubic meters and up to a 6-metre viewing distance, achieving 120dB sound pressure levels with distortion below THX minimum levels.

Or as THX puts it in plain English, “beastly speakers that produce a massive wall of sound that’ll immerse everyone in your theatre or hi-fi listening room, no matter where they’re sitting, with beautiful, distortion-free sound”. This new THX loudspeaker category is designed to bridge the gap between large home theatre speakers and those used in movie houses worldwide.

So fair the only speakers we’re aware of so certified are from Perlisten Audio, a new company teaming US engineers with none other than Lars Johansen, who exited M&K Sound in 2000. Perlisten introduced tow models at the virtual CED 2021 and had planned to demonstrate a full system at the recent CEDIA Expo 2021 in Indianapolis, until Covid forced the company’s withdrawal from the event.

The M&K X+ subwoofer might therefore make the company only the second one to achieve certification in this new THX ‘beast’ of a category.