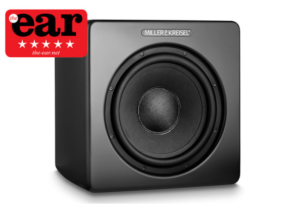 I have long felt that my Harbeth monitors were failing to give me the sonic satisfaction that I needed; there was something missing, notably in the bottom end. That last octave would surely add increased realism to movies, large-scale works and organ recitals?
While at the Dutch Audio Event I heard Harbeth Monitor 30s as I’d never heard them before.

The sound was richer, fuller and much more satisfying than I’ve ever been able to achieve. Asking the distributor what was going on, he pointed to a black box on the floor. Closer inspection revealed this to be a compact subwoofer in the shape of M&K’s V10 in new ‘plus’ form. Impressed by what I heard it was time to try one in my own listening room.

Miller & Kreisel was founded in 1974 as an American company with the claim of having created the first satellite/sub system. For the past 16 years they have been based in Denmark and are well-known in the home theatre world for their speakers which are a popular choice among both sound engineers and film enthusiasts. They are also a brand reputed in hi-fi circles for their hard-hitting and deep-digging subwoofers. Time to find out more.

M&K have the V series, a trio of ultra-compact powered subwoofers. The result of extended research and development they were relaunched this year as the ‘Plus’ range. These all-new designs aim to solve the age-old conundrum of audiophiles feeling forced to choose between larger speakers that have fallen out of fashion in the living room and more compact models that seriously
compromise the audio experience.

The V Series aims to give flexibility to suit budget and room size: the V10+ with a 10” woofer and 300 Watts, the larger V12+ with a 12” woofer and 400 Watts, while the mighty V15+ can deliver
500W into its 15-inch drive unit. In all instances the drivers are front firing rather than the more common down firing approach.

Across the V Series, the woofers are built on a stamped steel basket and incorporate a pulp cone, custom nitrile butyl rubber suspension surround, fiberglass dust cap and a newly- designed motor
system. This has an aluminum voice coil former and undercut, extended pole piece. The company boast that its drive units are capable of long, controlled excursion for extended deep bass with
exceptional authority and precision. 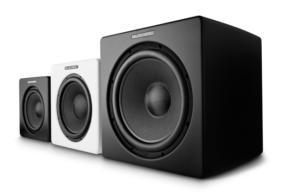 There are some design features borrowed from the top-of-the-line X Series such as aluminum shorting rings installed in the magnet system and a flared, vented pole piece designed to reduce
compression and distortion.

The V10+ is indeed a compact subwoofer and as well as that 10-inch driver in its infinite baffle enclosure, features a switched-mode power supply with a proprietary analogue front-end input
stage. The box is made of rigid 25mm MDF incorporating internal bracing of 19mm MDF to reinforce the enclosure and support the bass driver.
In ‘plus’ variant, the maximum power of the built-in class D amplifier has been increased from 200 to 300 watts, and the front panel has been reduced to a 345mm square. The 10-inch woofer has
been modified in that its cone is now made of a tougher cellulosic composite. At the same time, the lower frequency limit was also increased to 24Hz at -3 dB; and even 20Hz at -6.

dB. The rear panel retains all the switching and control capabilities of the predecessor: a pair of line inputs and loop outputs, volume control, low-pass filter and phase, supplemented by an auto-start function. Externally the curved and tapered cabinet now sports a magnetized front grille, which can be easily removed and replaced as desired.

My experience at the Dutch event revealed that M&K subs are very musical, go deep (deeper than expected for the cabinet size) and possess enormous ‘punch’, adding bottom-end grunt to the sound when that can’t be delivered by the main loudspeakers.

The ‘plus’ version of the V10 claims more power and greater depth than its predecessor; certainly, the output was impressive in terms of both characteristics although I wasn’t able to make a
comparison with the previous model. Connection is either a single RCA lead from an amplifier’s sub output or, as in my case, when using an auxiliary stereo output, a twin RCA lead to the left/right inputs provided. There is an ‘auto’ setting which triggers the subwoofer’s circuitry when a signal is detected, powering down to standby when no signal is present.

Siting the V10+ in a convenient position between my equipment rack and the left-hand monitor it was a case of adjusting the three rear-panel controls to what seemed optimal. There’s the phase
control, variable from 0 to 180 degrees, the default position being at 0-degrees. Ideally one uses a pink noise generator and spectrum analyzer to determine the precise setting, or so the instruction
manual recommends.

The crossover control is a life-saver when using a traditional hi-fi amplifier as opposed to a home theatre receiver which will have inbuilt filtering to ensure proper integration of satellite and sub.
I had to manually set the crossover control to an upper roll-off point at around 80Hz which is usually the point used in home cinema set ups. Finally, the volume control sets the subwoofer’s level. The larger and more expensive V12+ and V15+ models make use of M&K’s BLE app that allows adjustment from the comfort of the listening position and in a more sophisticated manner.
At first I was bobbing up and down, adjusting those controls with each piece of music until it was recommended that I just set the controls and leave them. This proved sage advice and gave me the
chance to just sample the subwoofer’s capabilities.

Sound quality
The V10+ certainly helped to provide that missing element to the sound, adding the bottom octave which is so necessary on some material. It’s no surprise to discover that M&K monitoring was
behind Academy Award-winning soundtracks for several blockbusters including The Lord of the Rings trilogy, Star Wars (I, II and III), King Kong, The Incredibles and many more. I had the greatest excitement with movies where the addition of the V10+ completely transformed the audio experience. Not with my staple diet of Will Hay, Peter Sellers or Terry Thomas titles, but even with the 2003 production The Booze Cruise where there was a whole new dimension to a soundtrack which I thought I knew. 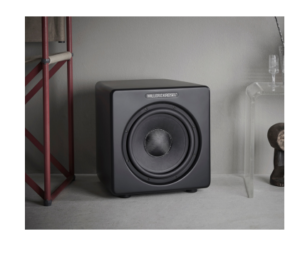 The level of realism went up more than a notch as the sound now became so much more realistic in what appeared a larger soundstage, certainly with more detail and all thanks to the addition of LF information. It really felt as if more of the cinema experience was being brought home, and this without any of the 7.1 or even 9.2 paraphernalia which fills some home cinemas.

A friend arrived clutching his DVD of Johnny English Strikes Again starring car enthusiast Rowan Atkinson. I’d seen this before, it’s been on telly after all, but not like this I hadn’t, wow. To think
that there is so much low-frequency information on the soundtrack, much of which is completely lost to anyone listening on TV speakers and even to those, like myself, who have a pair of stereo
monitors. To enjoy this movie so much would alone be worth the investment in a good sub; the added excitement, the increased tension and extra dramatic dimension were just breath-taking.

Back to my normal diet and BBC Radio 3 treated us to Brahms’ Third Symphony for its Afternoon Concert. I knew the concert was underway because I could feel the music through the floor, even
though I was working two rooms away; such was the power of the M&K V10+ to increase the immersive quality of the music and bring the venue even closer to home. Such added realism is
another reason to invest in a high-quality subwoofer. Adding the V10+ transformed the sound I achieved using my Harbeth M30.1s: not only was there bass extension but timing also improved
and realism increased across a range of recordings and live broadcasts.

Over the years of hi-fi reviewing I have experienced some subs which, quite frankly, I would not give house room to. But the technology has clearly improved and, as here, manufacture in the Far East has allows prices to be really competitive, making LF detail available to practically anyone. The obvious piece to use to test the V10+’s ability is organ and so to Bach’s Preludes, Fantasias,
Toccatas & Fugues on CPO from 2000. The joy of using recorded music was that I could undertake a series of A/B comparisons, playing the same track with the subwoofer on and then off. Really, it was chalk and cheese. Without the sub the music was as enjoyable as I remember it, having put the V10+ into circuit it was hard to go back and listen to the track, so much musical information was missing. It is almost inconceivable now to try and listen to an organ recital without the V10+ in circuit because so much important information is simply lost. 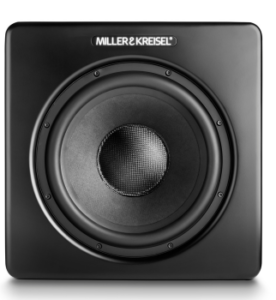 Away from music with my usual fare of speech (courtesy of drama and current affairs) the V10+ still managed to add something if not nearly as much as had been evident with films and music.
Indeed, with some older (black and white) films I actually found it beneficial to switch the sub out of circuit because it was revealing all-too-clearly some of the audio blemishes from the period,
unwanted rumbles and low-level blurring of LF signals which probably were not heard by the engineers at the time.

The V10+ from M&K provides perhaps the optimal bass solution. Here is a compact subwoofer with small footprint which looks unobtrusive and sounds, quite simply, fantastic. The price is such that it offers great value-for-money and should be considered a must-have for anyone who wishes to experience the full bandwidth from modern-day recordings but lacks speakers capable of faithful bottom-end reproduction.

Sure, it has taken M&K four decades of knowhow and constant upgrades to reach this level, but here now is a subwoofer range to perfectly integrate with an audiophile’s system. I realize now that
I have experienced too many poorly-designed and badly-implemented subs over the years with their tendency to clip and compress in their endeavor to extract LF information. M&K prove, in the
V10+, that super-fast deep bass is available simply and affordably without distortion or coloration of the sound. That’s some achievement. 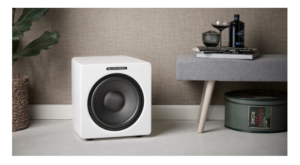